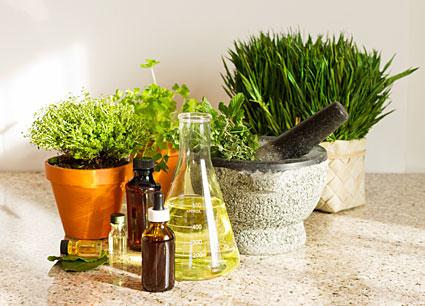 Any list of Ayurvedic herbs is substantial and must be broken down by doshas, the three distinct mind-body types in Ayurvedic medicine. You’ll find many of the herbs are common ingredients you’ve likely used in the past.
In Ayurvedic herbs, the three doshas are Vata, Pitta, and Kapha. It’s believed that every person has at least one dominant dosha..

According to Zandu, a company dedicated to Ayurvedic medicine, Vata people are generally thin, tire easily, and often lack energy. Following are some herbs recommended for people with a dominant Vata dosha:

In Ayurvedic herbs to increase energy levels and decrease stress and fatigue. According to Memorial Sloane-Kettering Cancer Center, Ashwagandha is iron rich and studies show the herb to have anti-tumor, antioxidant, anti-inflammatory, and anti-stress properties.

Ashwagandha may cause abortion and should never be used by pregnant women.

The Chopra Center states that Triphala is primarily used as a means to detoxify the body. However unlike traditional over-the-counter laxatives that often leave the body depleted after use, it’s believed that the antioxidant properties of Triphala leave the body and immune system strong and balanced.

The herb is believed to be an expectorant and have powerful blood purifying and anti-inflammatory properties. It may also be helpful in treating fevers.

Rasona, also known as garlic, is known for its pungent sulfur odor. It’s believed garlic may help reduce cholesterol, reduce blood pressure and improve some digestion disturbances. It’s anti-bacterial properties may help protect against bacterial infections and help heal some skin disorders.
Pitta people are medium sized built and have medium levels of energy. The following are some herbs recommended for people with a dominant Pitta dosha:

Amalaki, also known as the Indian gooseberry Ayurvedic herbs, is actually a small tree that produces small antioxidant packed fruits. The Chopra Center says that Amalaki is considered a very powerful rejuvenating Ayurvedic herb. In fact, it’s believed the fruits contain twenty times more vitamin C than orange juice.
Amalaki is also believed to have antibacterial, anti-inflammatory, and liver-protecting benefits and is used in Ayurvedic medicine to treat the liver and bones and nourish the blood.

This herb, also known as licorice, is used in Ayurvedic herbs to treat respiratory disorders and gastric ulcers. A study of oral cancer patients who developed oral mucositis from radiation and chemotherapy showed Yashtimadhu helps prevent and treat mucositis.

Also known as sandalwood, Chandan is a fragrant ingredient made from the sacred Sandal tree. It’s found in many aromatherapy blends but is also used in paste form to treat common skin disorders, and to cool, cleanse and hydrate the skin.

The body resist the effects of anxiety and stress. It’s used to help prevent colds and flu, support the immune system, relieve chronic skin disorders such as eczema, and helps protect the liver.

Kapha people are heavy built with large energy reserves enabling them to resist illness. Following are some recommended herbs for people with a dominant Kapha dosha:

Dry ginger, is a strong flavored ingredient known for its ability to ease digestive disturbances such as nausea, flatulence, and indigestion as well as ease symptoms of the common cold.  show ginger has anti-spasmodic abilities and may battle the growth of H. pylori, a bacteria responsible for many gastric ulcers and other gastric symptoms.

This Ayurvedic herb is commonly known as turmeric. It’s closely related to ginger and has historically been used in Ayurvedic medicine to help digestion, ease arthritis pain, and help heal wounds. While studies on turmeric are ongoing, the National Center for Complementary and Alternative Medicine (NCCAM) states that a compound found in turmeric — curcumin — is believed to have anti-inflammatory, anticancer, and antioxidant properties.
NCCAM indicates that turmeric is generally considered safe but may cause digestive or liver issues in high doses. In addition, people with gall bladder problems should avoid using the herb.

According to the Tillotson Institute of Natural Health, Haritaki fruit strengthen immunity and has a laxative effect. It’s also used to nourish major organs such as the heart, liver, and kidneys and to help heal eye disorders. The herb contains astringent properties as well as tanninswhich may help reduce the effects of stress on the body.
Some animal studies show celery seed may reduce cholesterol and blood pressure but more study is needed to determine if this is true for humans. The herb may cause photo toxicity so care should be taken if you’re using the herb and plan to spend time in the sunlight. In addition, pregnant women should avoid celery seed since it may cause uterine bleeding and/or contractions.